Mayor Brandon Scott, Health Commissioner Dr. Letitia Dzirasa, OSI’s Scott Nolen, and the Rockefeller Foundation’s Otis Rolley were among the officials discussing the progress on equitable vaccine distribution at a virtual town hall last night, Baltimore: State of Vaccination. You can watch the full event at the bottom of this post.

The event was presented as part of the Baltimore Equitable Vaccination Initiative (BEVI), a collaboration between OSI-Baltimore, the Rockefeller Foundation, and many other partners to improve the vaccination rate among communities of color, which have been disproportionately impacted by the Covid-19 pandemic.

Health Commissioner Dr. Letitia Dzirasa noted that 55% of city residents over 18 are fully vaccinated and that the goal is to reach 80% by February, 2022. As reflected in the graph below, the disparity in vaccination rates between white and Black Baltimoreans widened in the first several months after the vaccine was made available but has slowly begun to narrow since late April. 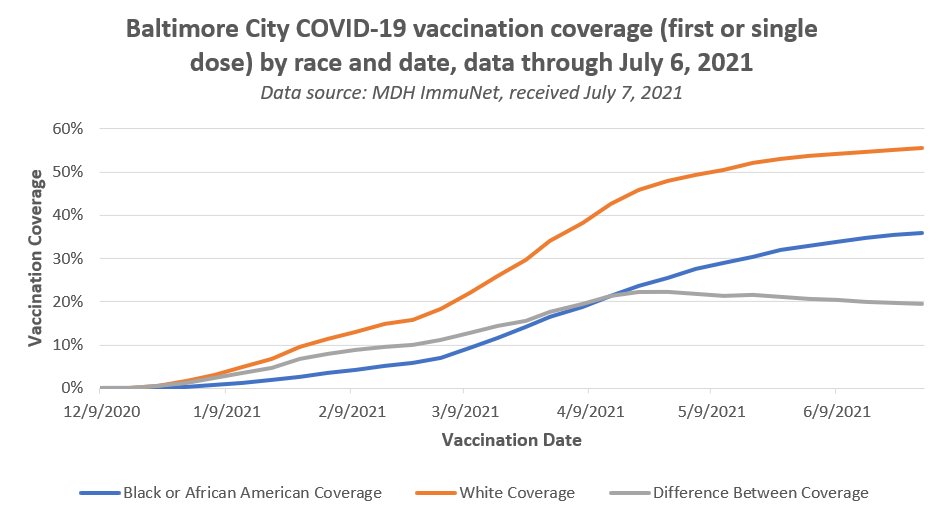 Fagan Harris, CEO of Baltimore Corps, talked about his own experiences contracting COVID early in the pandemic and introduced video tributes to several community-based organizations that went above and beyond to serve the people of Baltimore during the pandemic, including MOMCares, founded by 2018 OSI Community Fellow Ana Rodney, and BEVI grantees Helping Oppressed People Excel (HOPE) and Baltimoreans United in Leadership Development (BUILD). This section of the program begins at about the 52-minute mark.

Moderators Gina Worthey from Baltimore Corps and Natasha Murphy from Black Girls Vote shared a variety of resources, including Civic Works COVAX Small Grants portal, which individuals and organizations facilitating COVID-19 vaccination clinics and other COVID-19 vaccination outreach and education efforts can use to apply for small grants from OSI and Baltimore City Health Department funds. They also directed viewers to the under-construction Bmore Vaxxed website, where advocates will be able to tap materials to do vaccine outreach in their communities.

In addition to watching the event below, watch WJZ’s coverage of the event.