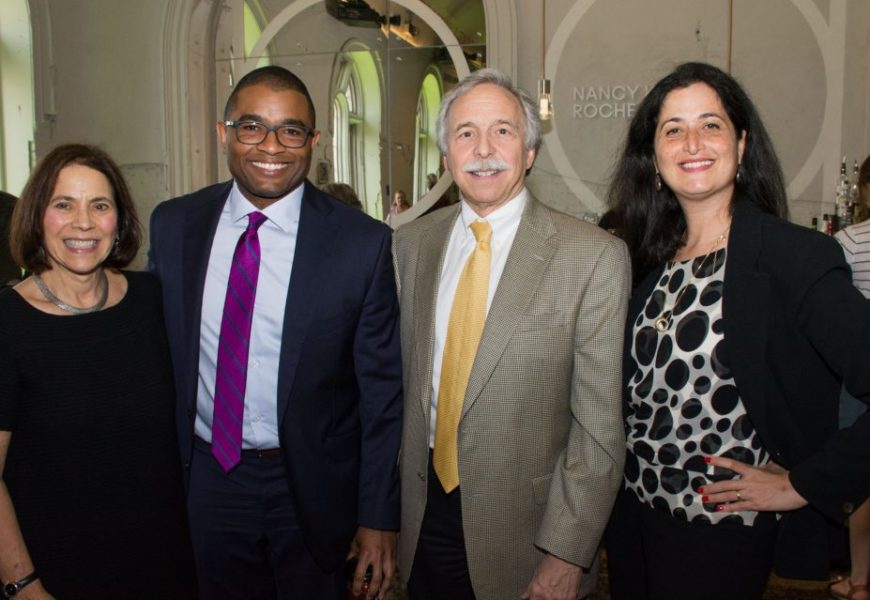 On Wednesday night, Open Society Institute-Baltimore held the first of three events in its 20th Anniversary Speaker Series. The keynote conversation, “Bold Thinking on Racial Justice in America,” featured Vanita Gupta, president and CEO of the Leadership Conference on Civil and Human Rights, talking to Pulitzer Prize-winning historian and OSI Advisory Board member Taylor Branch. (See pictures from the event, including the one above featuring, left to right, OSI Director Diana Morris with Advisory Board members Jamar Brown, John Meyerhoff, and Veronica Cool, on Sloane Brown’s Baltimore Snap.)

The program opened with a stirring performance by poet and 2015 OSI Community Fellow Brion Gill and an address from Morris, talking about the origin and purpose of OSI-Baltimore, the only US field office of Open Society Foundations.

Next was the presentation of “Bold Thinker” awards to Baltimore City Health Commissioner Dr. Leana Wen and Morgan State University Professor (and 2012 OSI Community Fellow) Dr. Lawrence Brown (who talked about his “White L vs. Black Butterfly” framework for talking about segregation in Baltimore).

Then 2015 OSI Community Fellow Brian Gerardo introduced Baltimore Dance Crews Project, the group he founded as part of his Fellowship, which performed their Baltimore Ceasefire-inspired piece “Call on Me.”

Then Gupta and Branch held their keynote conversation, which touched on ways to advance racial justice using the judiciary and the local level, despite the current administrations attempts to roll back previous gains. “We are not living in Trump’s America, he is living in our America,” Gupta said. “It will take all of us in this room and beyond to make sure we don’t lose sight of that.”

OSI Advisory Board member Chip Wendler ended the night by sharing the video below, in which OSI’s friends, partners, grantees, Board members, and Fellows talk about why they’re fans of Open Society Institute and asking everyone to join OSI in the work that lies ahead.

The next event in the 20th Anniversary Speaker Series will be September 25th. Details coming soon.